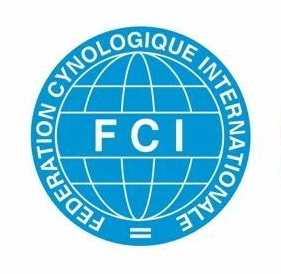 WELCOME TO THE WEBSITE OF THE ROMANIAN BICHON FRISE BREEDER "DE LARUS" !
Through this site, we try to pass on from our experience to all the lovers of this incredible and spectacular breed: Bichon A Poil Frisee.
We breed Bichons for 10 years now, but we bought our first Bichon from Belgium in 1993. Its name is Pomme De Villa-Sainval-LOSH 67 94 11 (female) and it was the first Bichon Frise in Romania.
At first, we didn? think that we will breed Bichons but I think you can imagine how hard it would have been for us to give away the puppies. And after that it all came by itself. That female proved to be a very good mother and it also had all the characteristics of the breed: teeth, proportion, pigmentation and a great coat.
Now, when I look back, I have to admit that we were lucky when we bought that female because at that moment we didn? know much about how a dog must look for show.
Orders soon came in, so we decided to buy a male and after that we started to breed Bichons under the name ?e LARUS and through the years I? sure we made a lot of people very happy.
Without pretending to be great dog experts, we tried to improve this breed aiming at the quality and not the quantity. We made a rigourous selection. The result?
We succeded in obtaining Bichons under the label ?e Larus whithout the red around the eyes and the muzzle as for the character, our dogs are even-tempered, intelligent and very obedient.
Finally, we thank you for your time and we will be glad to answer any question you might have about the Bichon Frise.
Maria and Cornel Lazar 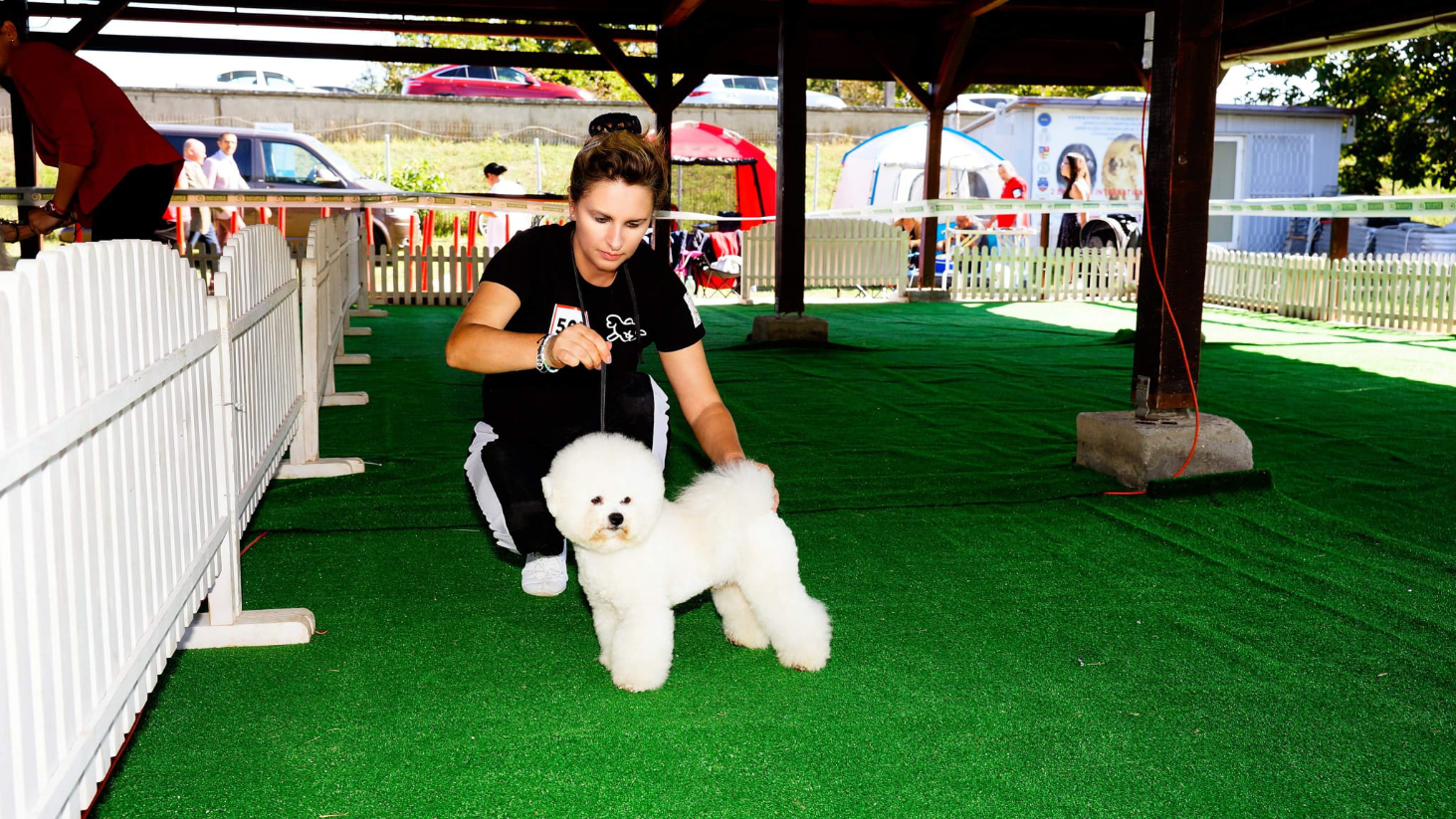 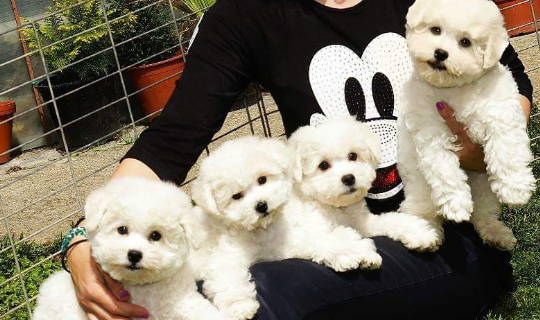 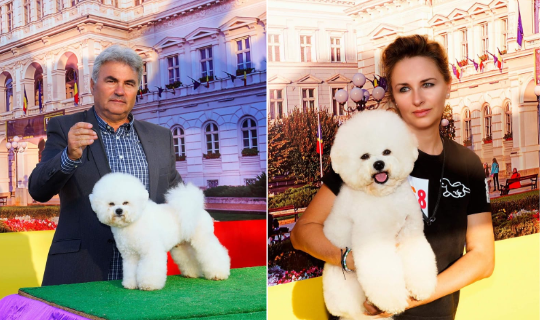 Bichon Frise History
Even the greatest experts admit that the history of the Bichon Frise, as it can be read in many specialised papers, is, at most, a mixture of good intensions, facts, fiction, deductions and stories.

The precise data are very scarce and the majority of the aveilable information has not been thoroughly verified. Still, the specialists agreed that such small fluffy dogs, frequently with white coat, existed even before Christ. Many theories, based on their origin and evolution, have been produced. Some historians say that this dog is the direct ancestor of the Maltese and is descending from a Spitz like dog, spred in the entire Mediterranian area.

On the other hand, an European specialist stated that the populations from the southern Europe bread small dogs, a dwarf breed that resulted from crossing of a miniature Spaniel and a miniature Poodle with Cayenne dogs. He considered that the Bichon resulted from this breed, and it is originating in Italy.

The dificulties to identify the origin of the this breeds result from the fact that these small floffy dogs, often white, had no other duty than beeing companion dogs, loved by the entire family.

As populations migrated frequently from one area to another, the ancestors of pet dogs are spread on a large area, keepin the small size beeing the only criterion considered when breeding. As a result, a large diversity of companion breeds was obtained.

From many hunderds of years, it could be seen that the the generic name of Bichon designated the following breeds:
- the Tenerife dog (Bichon Frise)
- the Bologne dog (Bichon Bolognez)
- the matleze dog (Bichon Maltez)

Closer to our times, a parizian magazine from the 30? mentioned the existence of 4 categories of the Bichon: Maltese, Bolognese, Havanese and the Bichon from Tenerife (Frise).
Bichon Frise Standard

HEAD : In harmony with the body.

CRANIAL REGION :
Skull : Rather flat to the touch although the furnishings makes it appear round. The skull longer than the muzzle.
Stop : Not much marked.

FACIAL REGION :
Nose : The nose is rounded, black, finely grained and glossy.
Muzzle : The muzzle must not be thick nor heavy, without however being snipey. The furrow between the superciliary arches slightly visible.
Lips : The lips are fine, rather lean, less however than in the Schipperke, falling only enough so as to cover the lower lip, but never heavy nor pendulous; they are normally black up to the corner of the lips; the lower lip must not be heavy nor visible, nor slack and does not allow the mucous membranes to be seen when the mouth is closed.
Jaws/Teeth : Bite normal, i.e. the incisors of the lower jaw are placed immediately against and behind the point of the teeth in the upper jaw.
Cheeks : Flat and not very muscular.
Eyes : Dark eyes, as much as possible with dark eyelids, of a rather round shape and not almond shaped; not placed obliquely; lively, not too big, not showing any white. Neither large nor prominent as in the Griffon Bruxellois and the Pekingese; the socket must not bulge. The eyeball must not stand out too much.
Ears : Drooping, well furnished with finely curled long hairs, carried rather forward when the dog is attentive, but in such a way that the front edge touches the skull and does not stand away obliquely; the length of the cartilage must not, like in the Poodle, extend to the nose, but stops halfway of the length of the muzzle. The ears are anyway not as broad and finer than the Poodle?.

NECK : Reach of neck is fairly long, carried high and proudly. Round and fine near the skull, broadening gradually to merge smoothly into the shoulders. Its length is approximately a third of the length of the body (proportion of 11 cm to 33 cm for a dog of 27 cm high), the points of the shoulder blades against the withers taken as basis.

BODY :
Loin : Broad and well muscled, slightly arched.
Croup : Slightly rounded.
Chest : Well developed; the sternum is pronounced; the false ribs rounded and do not end abruptly, the chest having horizontally a rather great depth.
Flanks : The flanks are well tucked up at the belly; the skin is fine and not loose, giving quite a whippety appearance.

TAIL : The tail is set a little more below the back line than in the Poodle. Normally the tail is carried raised and gracefully curved in line with the spine, without being rolled up; it is not docked and must not be in contact with the back; however the tail furnishings may fall onto the back.

FOREQUARTERS : Seen from the front, forelegs really straight and perpendicular; fine bone.
Shoulder : The shoulder is fairly slanted, not prominent, giving the appearance of being the same length as the upper arm, about 10 cm.
Upperarm : Not standing away from the body.
Elbow : Not turned out.
Pastern : Short and straight seen from the front; very slightly oblique seen in profile.

HINDQUARTERS : The pelvis is wide.
Thighs : Broad and muscular; well slanting.
Hock : Compared with the Poodle, the hock joint is more angulated.

FEET : Sinewy. Nails preferably black; it is however an ideal difficult to obtain.

SKIN : The pigmentation beneath the white coat is preferably dark; the genitals are then pigmented either black, bluish or beige.

HAIR : Fine, silky, very loose corkscrew curls looking like the coat (fur) of the Mongolian goat, neither flat nor corded and 7 to 10 cm long.

GROOMING : The dog may be shown with the feet and muzzle slightly tidied up.

SIZE : The height at the withers should not exceed 30 cm, the small size being an element of success.

FAULTS : Any departure from the foregoing points should be considered a fault and the seriousness with which the fault should be regarded should be in exact proportion to its degree.

Temperament of the Bichon Frise

They are perfect companion dogs because they adapt very easily to family life integrating quicly in the environment regardless of their age.

Although they are very intelligent dogs, they don? cope very well with the fuss, noise or tension.

The Bichon Frise is excellent for children, being an excellent play mate. They never bite. On the contrary, the kids should be the ones who must be careful not to harm the dog when playing.

The Bichon will happily welcome guests or strangers but only if the master is also happy. It is obedient, very agile and it always loves to play. Its master has to treat it nicely but also be firm without being too harsh with the dog.

Being so sociable, without a proper education, the Bichon could become very spoiled. Its kind, happy and loving nature recommend the bichon frise as an excellent ?pecialist in ergotherapy for both children and adults.

Its longevity is remarkable and often a 14 or 16 years old Bichon is still very lively.

As a conclusion: don? hesitate, let yourself seduced by it and the Bichon will surely offer you many years filled with joy!

It is impossible to go unnoticed

You?l imediatelly see its sophisticated appearance: a snowflake of fur, very soft, from which you can only see two small and dark eyes and a little red tongue.

The american breeders especially, desperate about spectacular show dogs, have dictated the current commercial image of the breed. But, the ones who really know this breed will tell you that the looks aren? the Bichon? greatest quality.

The best part of the Bichon Frise lays hidden behind those playful eyes...

This website uses cookies to improve your experience while you navigate through the website. Out of these, the cookies that are categorized as necessary are stored on your browser as they are essential for the working of basic functionalities of the website. We also use third-party cookies that help us analyze and understand how you use this website. These cookies will be stored in your browser only with your consent. You also have the option to opt-out of these cookies. But opting out of some of these cookies may affect your browsing experience.
Necessary Întotdeauna activate
Necessary cookies are absolutely essential for the website to function properly. These cookies ensure basic functionalities and security features of the website, anonymously.
Functional
Functional cookies help to perform certain functionalities like sharing the content of the website on social media platforms, collect feedbacks, and other third-party features.
Performance
Performance cookies are used to understand and analyze the key performance indexes of the website which helps in delivering a better user experience for the visitors.
Analytics
Analytical cookies are used to understand how visitors interact with the website. These cookies help provide information on metrics the number of visitors, bounce rate, traffic source, etc.
Advertisement
Advertisement cookies are used to provide visitors with relevant ads and marketing campaigns. These cookies track visitors across websites and collect information to provide customized ads.
Others
Other uncategorized cookies are those that are being analyzed and have not been classified into a category as yet.
SALVEAZĂ ȘI ACCEPTĂ